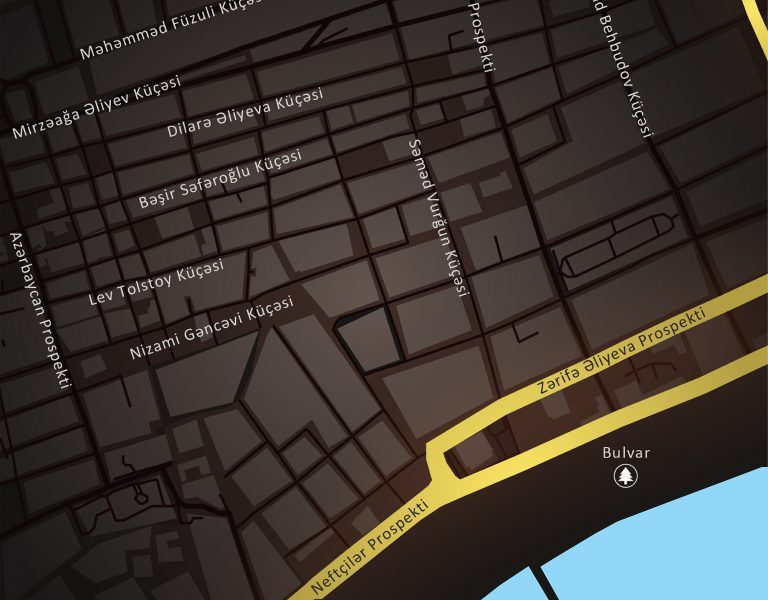 Cartographic rules are strictly obeyed  during preparation of maps and we  have sensitive approach towards design criteria.  Map designing first of all requires taste. In the course of work, one should be able to work with colors and have ability to feel them. Nature of colors and their harmony are important during design of maps.  Consequently, we have special approach to each map. Those approaches concern to both maps and atlases. From point of this view, we attach great importance to design issues.  As there are different methodological approaches during preparation of maps, different colors are used during designing those maps depending on nature of object and cases.  That is mainly necessary for preparation of thematic maps. Compliance of composition in the process of preparation of such maps should be absolutely considered. Harmony should draw attention in that process. Different sources can be used for preparation of cartographical products. Requirements of a Client are considered for selection of a source and digital maps are prepared which meet all requirements. At the moment, cartographical sources include aerospace data (Remote Sensing data), internet resources, Drone survey (photogrammetric survey, overground geodesy and topographic measurements (laser scan, LIDAR)), traditional paper maps (raster map).

Our company prepares different kind of digital maps on Geographical Information Systems (GIS) within framework of order and projects.  Our company, who signed a lot of contracts for this purpose, is also professionally engaged in establishing GIS on different kind of subject (Environment, construction, hydrography, agriculture and etc.). Converting conventional maps to raster and vectoring them we exactly georeference little deformed conventional maps considering all approaches, also observing transformation methods we georeference conventional maps which are not deformed and have different scale.

Preparing digital version of conventional maps are always topical. Old municipal schemes and maps, cadastral maps, topographic maps which cover previous years and etc. are kept as a data carrier of a raster character. Nowadays one can see such kind of maps a lot.  Those maps can be reviewed in case of necessity and data be obtained about any area and object.  Therefore, it is necessary to prepare digital version of maps. Eventually, objects on a map become digital and controlling them become possible. As a result geoinformation model of existing object and cases can be created in reality.  Reflecting concrete features of an object and case such model enables to review the existing condition and obtain efficient results during forecasting.  The important issue in creation of geoinformation models which belongs to special presentation form is not to which time interval belong an object and a case that is researched but  to ensure more precise description of its features and manner on a nature.  The world, object and cases that surround us constitute a difficult system.  Sometimes studying all parts of any ongoing process also a case that occures in that difficult and unique system is impossible.  Such models reflect both the existing condition and features like forecasting.  For this purpose different modern approaches, methods and algorithm are available.  The geoinformation models are also based on modern approaches and their special features are that they are capable to provide a wide information about an object and a case.